My feet feel like two blocks of pressed tofu but all the things considered I think that the NY Magazine event was a success. I'll start with the bad - even though I listed the good first. 1) The event started late and even though the kitchen was prepared to serve everything, we served about an hour later than we were supposed to. A lot of the food came out cold and the matzoh balls got gummy. And cold. 2) I think that some tables got screwed and had courses skipped or got less food because there were more people at their tables. We actually had extra food sitting downstairs for tables that got skimped out on but no one ever got them!

So because of the late start time I was kind of stressed out. My mom came downstairs to the kitchen to tell us that everyone was happy and enjoying themselves and the food, but she's my mom! She isn't gonna throw a cold tempura mushroom at me. And then my publisher came down and said the same. Chance of him throwing a cold tempura mushroom at me: only about 4% more likely. I read the reviews on Brooklyn Vegan and some were pretty bad, but studies have shown anonymous people on the internet to be 113% meaner than the general populace. When I combine the data from those factors I can easily grade everything as a solid B.

It seems like everyone had fun, and that is probably the most important part. Man Man was more insane than a drum circle in Tompkins Square Park in 1992. But they sounded awesome and there wasn't a random guy playing "the bottle." (ie: tapping his empty 40 with a stick) They just may be my favorite newish band lately, besides the Prids.

I also saw some guy fall of his chair. If that isn't a measure of success then I don't know what is.

There are some pics up at NYC nosh, like this one: 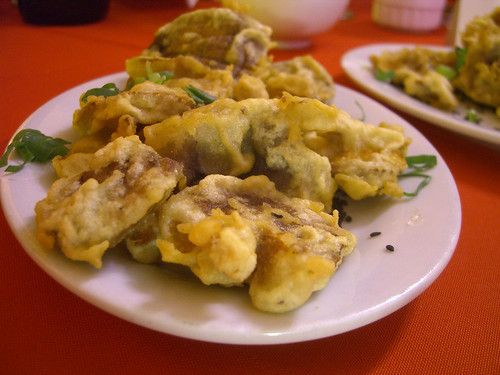